Logo Art Zuiderzee designed in 2016 by Petra Hart. The fish shape is created by connecting Zuiderzee towns on the nautical chart.

Art Zuiderzee shows contemporary art. The event takes place in or around historic buildings near picturesque harbors that are part of the former Zuiderzee. A platform about connection and inclusion that bring people together.

The idea to connect former Zuiderzee places through contemporary art arose in 2016 in IJmuiden (while Bas and Petra were searching for a house) and a memory of a dinner about Pampus Island and AMFAD that took place in 2015. Our house on the IJ-Haven stood in between. We saw the connection. There are many creative hubs on the IJ. EYE Film Museum, Pakhuis de Zwijger, Hembrugterrein, De A'dam Toren, Muziekgebouw aan 't IJ, Paradiso, De Houthavens, NDSM Werf, Theater aan het IJ, Bimhuis and much more. At first we thought of a connection between the two forts from Fort IJmuiden to Fort Eiland Pampus with all the creative hubs (Art, Media, Fashion, Architecture, Design) in between. 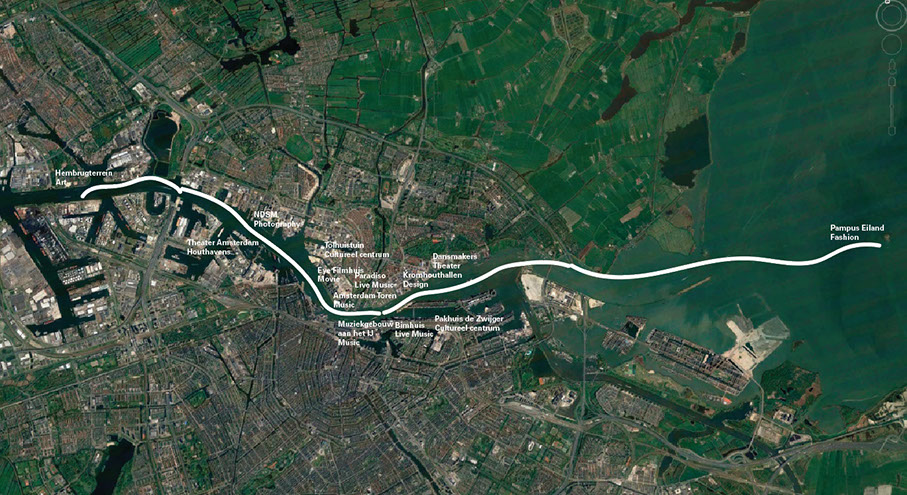 One of the first sketches in 2016. From art to fashion and everything in between.

Petra was born in Hoorn and grew up within the triangle Medemblik, Enkhuizen and Hoorn and has lived in Amsterdam for 30 years (currently works and lives in Naarden and Volendam). Partly because of her grandfathers, who were born in Volendam and Enkhuizen, she grew up around the former Zuiderzee between heritage, historic buildings, monuments, mills, fortresses, churches, castles and picturesque harbor towns. To connect these places through art through water, land and air has always been top of mind.

The wild and unpredictable Zuiderzee existed from about the beginning of the late Middle Ages until 1932. Her ancestors lived since 1800 near Katham (Volendam) next to the polder mill Kathammer. And one of them was the dikewarden of this mill. The flood disaster of 1916 ensured that the Zuiderzee was tamed in 1932. When Petra's grandfather was 9 years old, the dike broke in front of the farm where he lived. After that, it was no longer allowed to build so close to the dike. The new farm, where he laid the foundation stone, is now on the other side of the mill. He has always kept the land and the land outside the dikes and when Petra stood on the dike with her grandfather, he always said: I will keep this land on until the municipality of Volendam comes to me and wants to turn it into a tourist destination. Unfortunately, he couldn't make it, but he was right. Petra's parents sold the land and since 2007 Marina Park has been on it at the beautiful new harbor Marina Volendam.

When Petra's grandmother past away she was 15 and from then on she went to visit her grandfather every Friday afternoon to chat. He had a booklet about the Delta Works and often told her about it and that you should never underestimate the power of the water. The other thing Petra learned from him was the versatility of the Zuiderzee. The former Zuiderzee has always been the scene of many events; salinization, fisheries, the timber trade with the North Cape and Russia, Baltic Sea trade, The Little Ice Age (climate change), floods, storm surges, the Dutch expansion in the 17th century, import and export, the fight against water, drainage, Summer Olympics 1928 (sailing), Zuiderzee works, Afsluitdijk, from salt to fresh water, change in nature, reclamation of the Wieringermeer, Noordoostpolder, Flevoland, dike management, the art colony at Hotel Spaander in Volendam that shows picturesque scenes of the Zuiderzee and the botters (which gave rise to the Holland Mania in America), flora and fauna and during the harsh winter of 1963, thousands of people drove their cars over the ice, including Petra's grandfather who drove from Volendam to Marken from his own land.

Petra is trained as a concept thinker. Her concepts are always very close to her heart.